In 2002, I produced a series of eight land based paintings which were initially made over a six month cycle and were
interpretations of my environment. The view from my land gives an unbroken line of sight to the jagged formation of the Alpilles,
with St Rémy de Provence some forty kilometres away across the river Durance. To the left, lies the nose of the western end of
the Luberon chain, eighteen kilometres away. As the land is situated on the very first gentle rises of the Monts de Vaucluse, the
view is elevated just enough to float tantalisingly over the fields, taking in a large, ever changing swathe of land and light. This
could easily have been the sole impulse for making the series, but the primary reason was in fact, closer up.

When I arrived to live here 2000, my immediate neighbour owned a stud farm which bred, raised and trained thoroughbred
Lusitano horses, mainly destined for competition dressage and riding spectacles. There were around eighty mares and foals in
the troop, which were free to roam over a large acreage adjacent to the bottom of my land. The highly prized stallions were kept
under close guard.

My neighbour informed me of the urgency, as an artist, of immersing myself in this exquisite scene so perfectly pitched before
me. He had tried in vain to purchase the farmland and what I revelled in seeing would one day, in the near future, vanish. He
was right and the stud farm did move away, therefore a few years later some of the major elements that I’d drawn upon for the
instigation of paintings were gone, but the land still remained agricultural.

A key factor that would disappear was the permanent possibility of listening and watching the troop of mares during the day,
moving freely, in what superficially appeared to be random groupings. When the mares were confined in the night paddock, my
subsequent translation into paint of the punctuated conversations and body language between the semi-visible forms, seduced
and led me into their intimate world.

My assistant on these nocturnal observation trips was a large tabby cat, known as a “maître chat.
The “maître” was on permanent night watch, and as I lived on his sector, he would shoot out like a telepathic torpedo from the
undergrowth, rugby tackle my ankles and stay close by me until I returned. lt was partially by observing him, that I started to
learn why the troop would behave in a certain way, and how it reacted to the smallest rustling. The maître, however, was
permitted to weave skilfully between the horses’ hooves, without provoking even the slightest twitch of an ear.

In May 2015, when I came back to reworking the series of paintings, I’d realised that since leaving the work in 2002, the result
was too timid and did not accurately reflect a deeper experience which had accumulated as time had passed. The subject
begged to be narrated more fully and freely and I found myself suprisingly often, chewing over and stacking ideas for the series
eventual completion. The paintings that I made in 2002 had been waiting patiently in my mind, and I was now finally ready to
start. I worked directly on the existing paintings, reducing, striking out, intensifying and emphasizing certain aspects.
When the reworking cycle had been completed, the basic original structure and composition were still evident, but the paintings
had gathered more density and emotion, and although the subject could be considered as inherently romantic, it was not my
intention to be so. The challenge was to remain absolutely truthful to what I needed to record.

1. Prism
Taming the strident yellow of gorse – which is almost an affront to the eye- under the glaring spring light is challenging, but this is
Provence, and the new, green vegetation fights back with an equal intensity. The only thing that tempers the eye is the chalky,
pale earth. It is not really necessary to include the clearest of blue skies that collide the colours so brazenly. 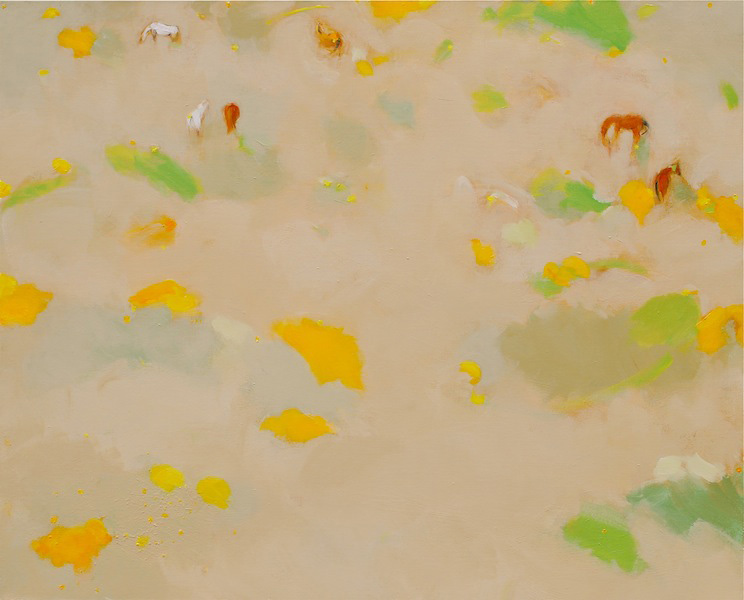 2. Red End
When the light goes down through the dusty, red end of the spectrum, the troop of horses whirrs and wheels in concentric
circles, then funnels into a single file, charging back towards a large night paddock. They stream through a piercing blue of
flowering chicory which emits a surprising and unreal, radioactive glow. The long late-June day would have been incredibly hot,
but still with just enough breeze to breathe. 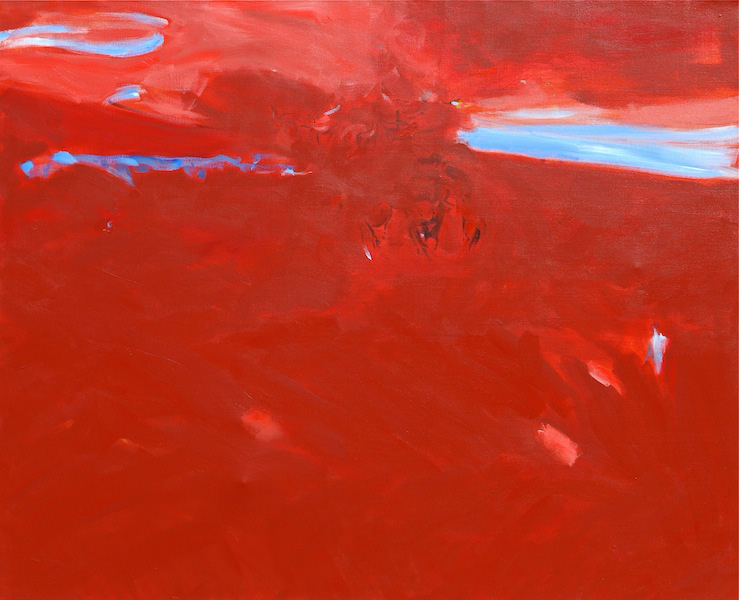 3. Sentinel
The night is clear and the troop’s nudging body language is silky and fluid. Forms meander in slow motion drifts, blurring and
hovering between the land and the night. An occasional gleam reflects in an eye. Even In this peaceful, ethereal paradise, the
“watching” horse stands sentinel on the edge of the troop, with its ancient, inherent panic button primed to signal any predatory
threat. 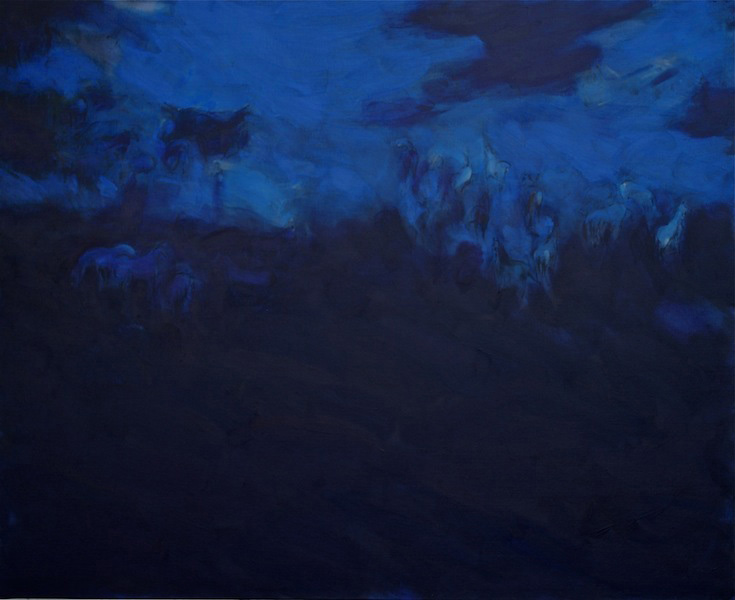 4. Sepia Sleep
By mid-late July the suffocating orange-brown insect laden air is soupy and thick. After 10 days of 38-40 c temperatures, the
horses are economic in their movements and the night paddock holds a heavy, locked in stillness. The mares are difficult to see,
catching a barely perceptible red outline of a rump, or neck, craning across the mane of another to give comfort. Their eyes are
tired and sticky from the subsequent invasions of horseflies, trapped under a helmet of leaden heat. Their conversations are
muted, as the mass of ears and tails flicker listlessly away through the night. 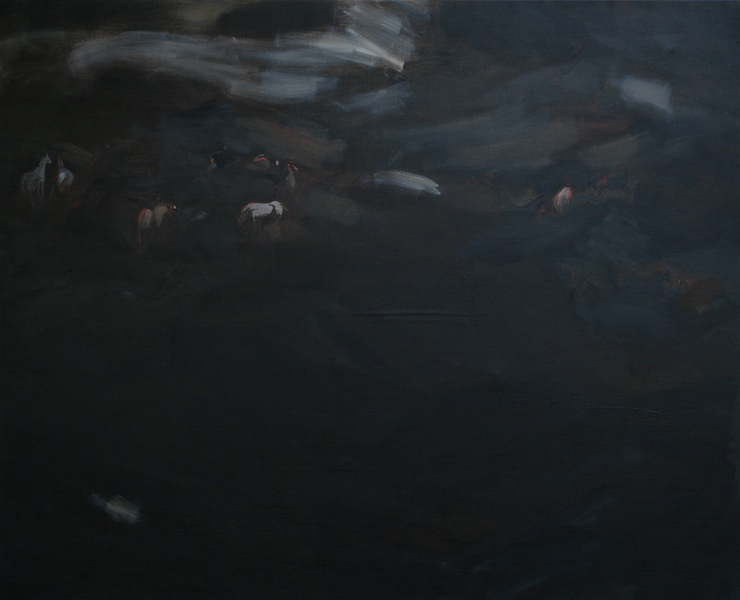 5. Tear Your Heart Out
Vicious mistral wind can suddenly arrive at anytime and can stay for days, but it seems even more cruel and dirty when it
thrashes down the Rhone valley in late August, as it strips out the last remaining moisture from a virtually redundant landscape.
Remaining housebound, as the shutters try to liberate themselves from their hinges- and you must not- finally venturing outside
brings no solace. A lone telegraph pole seems to be the only object that has miraculously, not been displaced, remaining dead
straight as it points back accusingly in a stark, melancholic exchange. 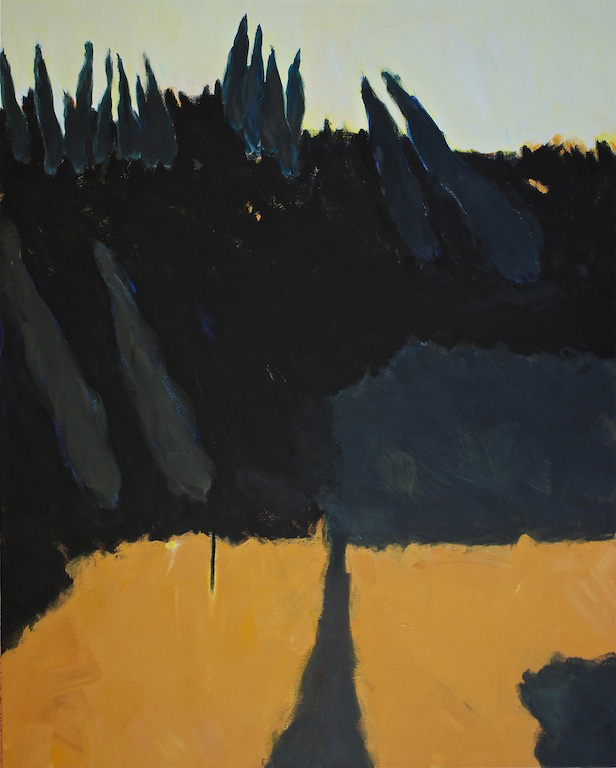 6. Cadmium West
When the ‘fat rain’ weather system arrives directly from the West and beats across my line of sight, it is nearly always in a huge,
nerve-wrackingly ominous, wedge-shape cloud, which pummels and hammers great torrents, mercilessly breaking up the
hardened land. I held my breath each time I saw this ” heaven and hell” sky formation, until finally I felt qualified and
unrestrained enough to place the horizontal gash of cadmium yellow across the piece. These weather patterns have often
proved deadly, although it signals that the risk of forest fire is over – for now. 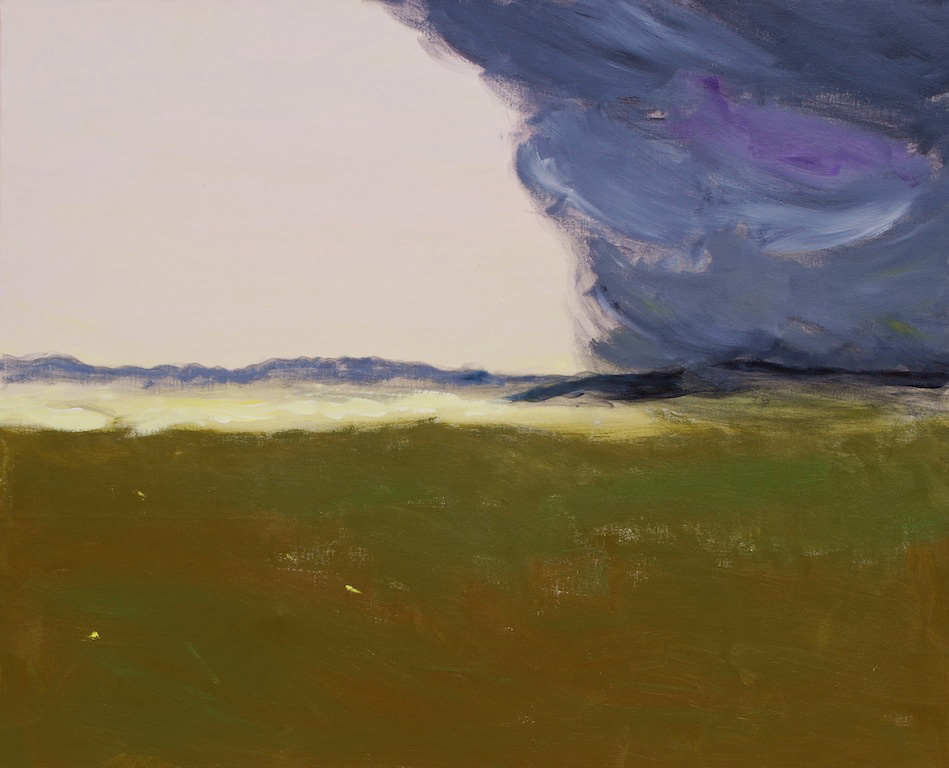 7. After Rain
Around mid September, after months of living in a thirsty, sometimes monotonous landscape, a second spring comes. This
change often arrives after one huge, and often very violent storm. Suddenly, the rain plumps the land back, as if intravenously,
to an unexpected, emerald, pastoral sweetness. The grating and oppressive scrubbiness of the last twelve weeks is too quickly
forgiven! In the damp, dust free atmosphere of the flat, post- storm light, the colours of individual members of the troop, now
mud-splattered and grazing on lush new growth, are for me, seen at their best. 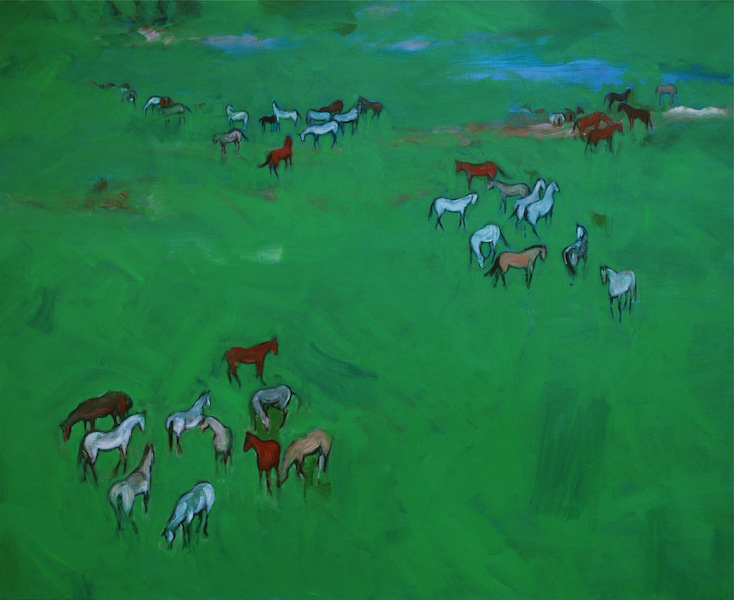 8. Then There Were None
By early mid-October, blustery dabs of damp, sand-bearing clouds blow in on gentle Saharan winds, dispersing an extremely
delicate pearl light, misting the olive groves with fine rain. These are the calmest of times and although the sun is still strong
behind the filtered clouds, nature, for once, seems benign. The horses have become enveloped and emulsified into a ‘buttery’
oblivion. 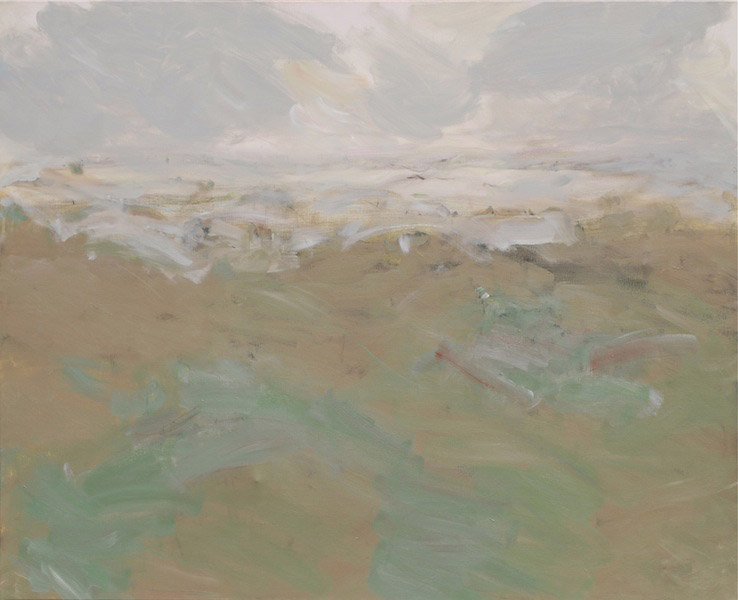