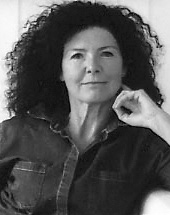 Zoë Kronberger was born in England in 1952 and lived and worked mainly in London. Since 1990 she has lived in France and divides her time mainly between the Vaucluse, Val d’Isère and London.
She studied graphic design at Manchester College of Art and Design, which was her initial choice of profession. Growing up in a musical and scientific family enabled her to explore other avenues and she rapidly left formal art training. From the middle of the 1970s she worked as a pianist and composer in London in several genres, encompassing Rock, Jazz, Funk and Pop, to classical string quartets for film and television.
Moving to Val d’Isère in 1990 her drive to paint gained momentum and her themes became directly inspired by the environment. Dynamic figures in the shape of the skier, the contours of landscapes and cityscapes, all are reduced to stark forms and lines and synthesised into a global encyclopaedic essence. Her thoughts and ideas gestate in a slow and analytical process in order to penetrate the nucleus of her subject. Influenced by the structure of music and the immediacy of graphic design, Kronberger weaves, fuses and accelerates these elements together into her paintings.
The power of Zoë Kronberger’s art lies in the inherent rhythm of her composition, the balance between different elements and the ability to target her strokes with great precision.
She says about some aspects of her work, “I’ve got to get it under my feet”, and “sometimes it can feel like I am bending forces and punching great holes in the air”.

1962-69 Schooling in North Wales, including art and art history.

1969 Begins her studies at Manchester College of Art and
Design, but leaves formal training.

1973-99 Founds her own Jazz-Funk group in London on keyboards.
Composes and arranges in several musical genres
including Jazz, Rock, Pop and Funk and later composes
classical music for television and film.
Whenever possible continues to paint.

1990 Moves to Val d’Isère, France. Her music reflects her
life in the mountains and begins to show links with her painting.

1999 The fabric design house Pierre Frey, Paris, produces
two furnishing fabrics from her paintings. Produces a series of large drawings
which become a catalyst for her future work as an artist.

2000 Dedicates herself uniquely to art.
Moves summer home/atelier to the Vaucluse, France, where she is able to develop the large format works.

2001-10 Series of single exhibitions, in France and Switzerland.
Develops her various subjects and themes with intensity. Starts receiving regular commissions.